“The most American film of the year and the year’s toughest sell”~Austin Dale, INTO

Aroview: An unforgettably moving portrayal of the bond developed between a 15-year old boy with no knowledge of horses and an aging race horse. Directed by Andrew Haigh, who is already beloved for his striking talent for imbuing cinema with a humanistic depth. 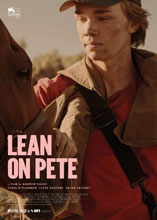