“A bonkers, bat shit insane movie, but a funny one. If you're in the mood to experiment with an unconventional, sometimes loony comedy, I recommend it.” ~AroVideo

Aroview: Maverick existential black comedy about a young couple whose new LA apartment turns out to have been the site of a cult leader's suicide, and his disciples are eager to break in and follow his lead. Features a stand-out cameo from Taika Waititi as the Holy Storsh himself. 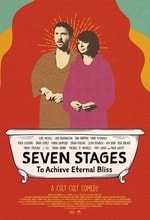