Aroview: Mark Rylance and Kerry Fox bare their flesh as well as their souls as a separated father-of-two and a married mother who meet weekly for torrid, anonymous sex in a drab London flat. 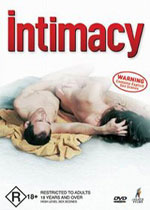