Aroview: Grisly TV miniseries based on the 1983 arrest of Scottish serial killer Dennis Nilsen, one of the most infamous criminal cases in UK history.

David Tennant (DOCTOR WHO, BROADCHURCH) provides a compelling, understated performance as the terrifying narcissist and serial killer who feigned an ordinary life to his colleagues and friends, until human remains blocking a drain near his home in London's Soho lead to his arrest. An impressively glamorous portrayal of the bleak realities of catching a serial killer (episode one), preparing to charge them (episode two) and putting them on trial (the final episode). 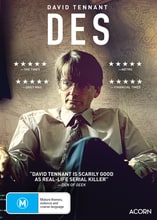