“Has all the character intrigue, clever plot twists and red herrings to keep viewers guessing.”~Variety

Aroview: Conventional though atmospheric outback thriller starring Eric Bana as a federal agent who returns to his drought-stricken home town after more than twenty years to attend the funeral of a childhood friend, who has allegedly died in a murder-suicide.

Faced with prejudice towards him and the pent-up rage of a terrified community he stays to investigate the crime that may be linked to the death of a girlfriend decades before. Based on the book by Jane Harper. 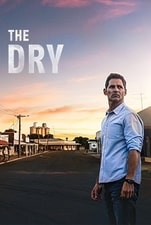