“The Last Duel reveals itself as something all too rare on the current Hollywood field of battle: an intelligent and genuinely daring big budget melee that is — above all else — the product of recognizable artistic collaboration.”~Ben Croll, IndieWire

Aroview: Grand historical drama from director Ridley Scott, set in medieval France, where King Charles VI declares that a knight (Matt Damon) settle his dispute with his former friend the squire (Adam Driver), by challenging him to a duel.

Offering a critique of systemic misogyny wrapped in a lavish medieval epic, Jodie Comer is the true star here, playing the knight's wife who accused the squire of raping her, and bravely faces the consequences.

From a screenplay by Nicole Holofcener, Ben Affleck and Matt Damon, adapted from the 2004 book "The Last Duel: A True Story of Trial by Combat in Medieval France" by Eric Jager. 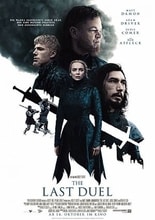