“It is the kind of film you watch on accident more than seek out, but you probably won’t regret the accident.”~Slashfilm

Aroview: Action thriller from frequent Clint Eastwood collaborator Robert Lorenz, with Liam Neeson cast unsurprisingly as an ex-marine and rancher who lives along the Arizona-Mexico border, calling in illegal crossings.

After a shootout with members of a Mexican drug cartel, he finds himself the unlikely defender of a young Mexican boy who was attempting to escape the cartel, after his family are fatally injured. Neeson provides a suitably Eastwood-style performance as the lone American hero type. 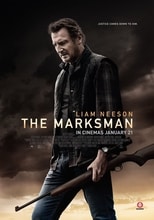