“A compelling and occasionally exciting history lesson. Wilson is the key, and lights up the screen every time he appears. Fortunately, that’s quite often.”~Colin Fraser, MovieReview

Set in May 1940, when the war between Germany and its neighbours has intensified. When the French army collapses, Hitler seizes Paris and while the French government considers accepting defeat, recently promoted two-star general de Gaulle (Lambert Wilson) decides to change the course of history and launch a daring counterattack. 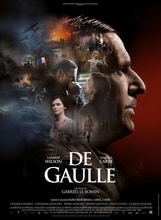