Aroview: The first ever 'Superman' TV series, this was an immensely popular rendition of the comicbook tale of the Man of Steel, whose life as mild-mannered journalist Clark Kent is an effective cover for his true vocation as an heroic force of justice.

Fans of the fantastical villains of the later movies will find this a refreshingly different dish, with Superman (Reeves) inhabiting a tough, rather 'film noir' world, and facing a series of petty gangsters, whom he isn't sometimes above dispassionately dispatching. Short on special f/x, this instead gets by on swift plots, snappy scripts and good ol' entertainment value. After Season One, the series was distinguished by a little more variety and the appearance of new perils, such as kryptonite... 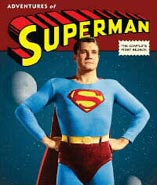