Love it Was Not

“The result of long years of research, Love It Was Not is remarkable not only for its unusual central story and unique creative execution, but also for its extensive eyewitness testimonies.”~Alissa Simon, Variety

Aroview: Superb documentary about the incredible story of an SS officer and a Jewish prisoner who fall in love and have an affair at Auschwitz.

A talented singer, Helena Citron is tragically taken to Auschwitz as a young woman, but finds solace a dangerous illicit love affair with Franz Wunsch, a high-ranking SS officer. Thirty years later, she receives a letter from his wife, imploring her to testify on his behalf, despite his actions during the Nazi regime. 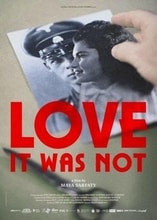