“It is all at once a gleefully raucous rock romp and a freaky horror story of possession and gruesome murder.”~Slashfilm

Aroview: Rock band Foo Fighters move into an Encino mansion steeped in grisly rock'n'roll history to record their 10th album in this horror-comedy that turns out to exceed gimmicky expectations as the funniest music parody this side of Jack Black.

With inventive kills to rival anything in Rob Zombie's imagination, it boasts a decent script and performances from the whole band (RIP Taylor Hawkins), but it's Grohl himself who is perfect as a prima donna band leader possessed of a thirst for power and glory. Critics be damned, this movie actually rocks! 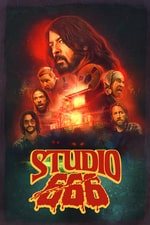